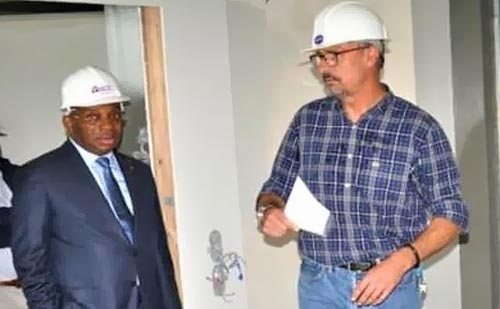 Mister Siandou Fofana, Minister of Tourism,  was welcome by Mr Yigo Thiam, Managing Director of Teylium, the owner, and by Jean-Francois Louis, Project Manager of Gassim during his visit of the new Hotel Noom. Jean François Louis gave  Mr Sandiou Fofana a tour of the hotel. The Noom Hotel has 180 rooms, 6 conference rooms, sky bar, pool, night club… The hotel is a 56 m high rise building with 23 floors. The main contractor is the Moroccan TGCC with Humiclima, the architect is the Spanish GCA.

Siandou Fofana has several years of experience in road infrastructure development.  Siandou Fofana is the Minister of Tourism since more than 2 years.

Yigo Thiam has been Managing Director of the Teylium Group since its creation in 2005 and is graduate from the Ecole Supérieure de Commerce de Paris.  He began his career in auditing at Arthur Andersen in Paris and then at Ernst & Young Abidjan before taking over as General Manager of DHL Burkina Faso in 1995. He then participated in the creation and launch in 1997 of GSM Telecel Côte d’Ivoire before becoming its General Manager.

Jean-François Louis, is a French national, and he brings more 28 years’ experience in construction.

He’s in charge of the control and the coordination on site of all the aspect of the construction process in respect with the international standard requirements. He’s the link between the Client, the consultants and the contractors.

Jean-François has worked in many different projects like the Hilton Hotel in Abuja, high rise buildings in Dubai, hotels in Monaco, sports facilities in Congo and university in Saudi Arabia. Prior joining Gassim, he developed his expertise with few companies including Artelia, Socotec…

Jean-François has strong knowledge in all aspects of managing a construction project.